Seventy miles for two peaks and a fish

After a short scramble, the summit of this peak in Glacier National Park gave Trevor Reid a memorable evening view. (JP Edge photo)

Taken with an iPhone, an underwater view of Dawn Mist Falls in the Belly River. (JP Edge photo)

The views from a false summit of Pyramid Peak. Without proper gear, snow stymied an attempt on the summit. (JP Edge photo)

In a party of two, my partner Trevor Reid and I began our thru-hike on the North Fork Circle Loop in Glacier National Park at Apikuni Falls. With Many Glacier Road closing soon, we were shuttled to the entrance and left a car waiting for us at the Loop on Sun Road for seven days. After the first night at Poia Lake, we trekked over Red Gap Pass and were surprised by winds gusting over 60 mph, which blew Trevor off the trail, and almost off of the mountain. We reached Elizabeth Lake Foot camp at 6 p.m., soaked from head to tent.

The third day we passed Dawn Mist Falls on our way to Glenns Lake. The next day, unable to summit Mount Merritt due to weather, we made an attempt on Pyramid Peak, but were surprised by another storm that caught us on the false summit.

The following morning we planned to hike Stoney Indian Pass, and were awoken at 7:30 a.m. to wolf howls and the cries of their recent catch. As we left Mokowanis Lake, we saw their prints in the mud, as well as the elk they had been chasing. Trevor, an Alaskan fly fishing guide, pulled out his rod and caught a good-sized rainbow trout on Glenns Lake. As we approached the pass, we hiked under massive waterfalls and breathtaking views. We then watched the sunset and ate our dinner on top of Stoney Indian Pass.

The next day, after hiking nine miles to Fifty Mountain, we made another attempt at a summit, this time on Mount Kipp. We reached the top for sunset which gave us views of Mount Merritt, Cleveland, as well as Chaney and Shepards Glaciers.

On the hike back, we spotted a large grizzly bear above the timberline that charged at us. While I did have bear spray, it was only a bluff as he darted away at around 15 yards — too close. Every noise that night felt like a bear as I drifted to sleep in my tent.

For our last day, we hiked the Highline trail back to the Loop and back into civilization. The car and the amount of people were a welcoming sight, but it felt strange to be back after all we had been through. We celebrated with beer and pizza at Moose’s Bar in Kalispell.

The views from a false summit of Pyramid Peak. Without proper gear, snow stymied an attempt on the summit. (JP Edge photo) 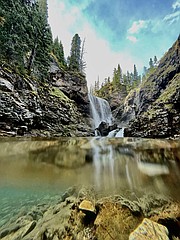 Taken with an iPhone, an underwater view of Dawn Mist Falls in the Belly River. (JP Edge photo)