Wildcats drop three in a row

Jace Hill steps up for a shot against Whitefish on Friday. (Teresa Byrd/Hungry Horse News)

Alihn Anderson with a shot against Libby on Saturday. (Teresa Byrd/Hungry Horse News)

Cooper Babcock goes for the shot in a game against Whitefish on Friday. (Teresa Byrd/Hungry Horse News)

The Cats started the week on a higher note by ending Thursday’s matchup against Polson with only a 17 point trail, a major improvement from the 32 point lead the Pirates were able to secure against the Cats earlier in the season.

“The kids competed hard throughout the game,” said coach Chris Finberg, noting that the team’s improvement from their last game against the Pirates was encouraging.

“In the first half we had a lot of good looks, we just didn’t shoot that well,” Finberg added. “We hung in there for a while, and I think if we would’ve shot better that first half, it could have been a different game.”

Jace Hill led the Cats against Polson in scoring with 20 points, followed by Alihn Anderson with 12 and Allec Knapton with 11. Knapton also had 13 rebounds.

On Friday, Columbia Falls suffered a difficult 11-point loss to Whitefish at home in a game that lacked some of the balanced, even scoring typically seen amongst Wildcat players on the court.

Hill led the Cats against Whitefish in scoring with 29 points, followed by Cade Morgan with 11. Knapton secured 9 rebounds.

Saturday afternoon saw a five point loss against Libby in a game that was neck-and-neck for all four quarters.

“I thought we played with a lot of energy tonight,” said Finberg following the Libby Loggers matchup. “We just couldn’t get a stop when we needed it, you know.”

Morgan led the Cats against the Loggers in scoring with 19 points, followed by Hill with 12 and Knapton with 10. Knapton also had 15 rebounds.

“Losing three games in three days is tough,” said Finberg. “But this team is resilient, and we’ve got enough talent that I think we’ll bounce back.”

The Wildcats played Bigfork at home on Tuesday after presstime, and will play a home game against Stevensville the following Tuesday, Feb. 16 at 7:15 p.m. Saturday’s game against Browning is postponed until Feb. 19. 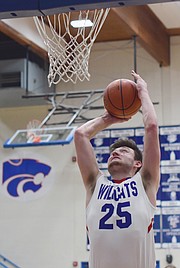 Cooper Babcock goes for the shot in a game against Whitefish on Friday. (Teresa Byrd/Hungry Horse News) 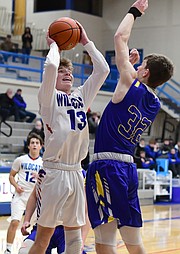 Alihn Anderson with a shot against Libby on Saturday. (Teresa Byrd/Hungry Horse News)