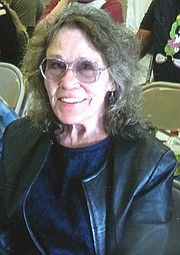 Our much-loved mother, grandmother, and friend passed away on Feb. 9, 2022.

She was a proud fourth-generation Montanan, born to William Boyce Miller and Grace Lee Berndt in Helena, Montana, on April 29, 1938. She was adopted at age 2 by Carl Frederick Ellefson and Adla Oldenburg Ellefson. She attended schools in Kalispell, Missoula and Hamilton, where she graduated high school.

Mom also greatly enjoyed gardening, reading and music. She loved all animals, especially dogs and horses. Mom is a published poet in the International Library of Poetry, was featured in Gurney’s Seed Catalog with a picture of her beside her stocked shelves of canned veggies from her garden.

Mom held a variety of jobs in her life, a legal secretary in Hamilton and California, food service at Montana State Veterans Home, janitor at Anaconda Aluminum, waitress at the Brass Lantern and bartender at the Columbia Bar.

She was preceded in death by her daughter Sherry Lynn Dunbar in 1957, her parents, her brother Larry Ellefson and her husbands.

Cremation has taken place and at her request, there will be no formal services. She desired for anyone wishing to make a memorial to donate to the Humane Society of Northwest Montana.

Mom will be greatly missed by her family and friends, she was truly a remarkable lady.