The Wildkats celebrate at home plate after an Abbie Darsow homer put them up 14-0 against Polson on the road last week. (Scot Heisel photo)

The Columbia Falls softball team had a stellar week, including walloping state A defending champion

The Kats have yet to lose on the road.

Against Polson, The Kats scored 8 runs in the third inning and 5 in the fifth in the victory.

Polson would score four in the fourth, but the game ended after five due to the mercy rule.

Maddie Moultray got the win on the mound.

Abbie Darsow and Kyrah Trenkle both hit homers. Darsow’s homer put the game away in the

Trenkle went long in the third. Against the Loggers, Sydney Mann had a hot bat, with two homers as the Kats put up four in the fourth and four in the sixth to down the Lady Loggers. Moultray went the distance on the mound, allowing three hits and two runs while striking out eight.

Mann had three RBIs. Against Browning, the Kats shot out to a 13-1 lead in the first inning and the game was called after three.

The Kats faced Flathead at home Tuesday after presstime and then square off against undefeated Frenchtown Friday at the Frenchtown tourney. 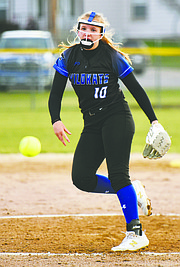