A classic scene of Lake McDonald by photographer Ed Gilliland.

Local historian Arne Boveng with a large format projector at his home. He will be showing a collection of Ed Gilliland photos in an August event at the Northwest Montana History Museum. Behind him is some of Gilliland's work.

A new venture is bringing a treasure trove of historic and fine art photos to the Northwest Montana History Museum.

The Ed and Nancy Gilliland Collection will be housed at the museum thanks to a generous donation by the family, said local historian Arne Boveng.

Boveng and photographer Adele Scholl of gravityshots.com have been friends with Ed Gilliland for years now.

Gilliland died in 2020 and Boveng set to make sure his collection was preserved. Working with Nancy Gilliland, Scholl and the museum, an agreement has been struck whereby the museum will house and display the collection, while proceeds from prints will be split between Scholl, the family and the museum, Boveng, a local historian, explained.

Gilliland was a fine art photographer, traveling the West shooting scenes with his large format cameras, ranging from 6-by-6 centimeters to 8-by-10 inch negatives.

“He’d come back to the same scene over and over again, shooting it as the seasons changed,” Boveng said.

Gilliland’s attention to detail was unmatched.

“None of his work is cropped,” Boveng said. “He was a composition photographer.”

But he also had a passion for collecting other photographer’s works as well, including the likes of Ferde Greene, R.E. Marble, TJ Hileman, Marion Lacy and more.

Scholl has spent years scanning in prints and negatives. They’re available for viewing and purchase at glacierparkphotography.com.

The website contains nearly 4,000 images, she said and she’s continues to scan more every day.

“Greene is the only one we’ve completely scanned,” Scholl said.

Scholl helped Gilliland create the website about five years ago as a way to initially, just showcase his work.

She said scanning the negatives has been an emotional experience at times.

Greene kept notes on all his pictures.

“He’s got the f-stop written down, the exact time of day, subject and location,” she said. “It felt like I was part of his family.”

Greene is of particular interest to Columbia Falls, since he lived and photographed the town extensively from 1915 to 1940.

The museum is thrilled to house the collection and will feature galleries of the works in the future, director Jacob Thomas said.

“It’s a great opportunity to share that history,” Thomas said, as the area has changed and developed.

Thomas noted that Gilliland was instrumental in founding the museum in the 1990s.

“He got us up and running,” Thomas said. “Now we have an opportunity to repay that gratitude.”

Boveng will showcase some of Gilliland’s work using a vintage large format slide projector at the museum from 6 p.m. to 8 p.m. Aug. 18. 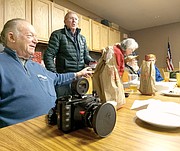 Local historian Arne Boveng with a large format projector at his home. He will be showing a collection of Ed Gilliland photos in an August event at the Northwest Montana History Museum. Behind him is some of Gilliland's work. 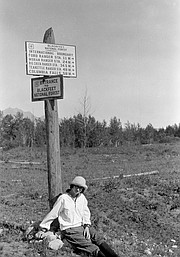