Three young women to be inducted into Hall of Fame

Three standout athletes — all of them young women — have been named to the 2020 Columbia Falls Athletic Hall of Fame.

They’ll be formally recognized Jan. 9 during the Columbia Falls boys basketball at home.

Kimberly Peacock: Peacock was a standout cross country runner and holds the school record of 18 minutes, 19 seconds, a mark she set in 2016. Other highlights included being all-conference in track and field in 2017 and divisional champ in the 3,200 meters in 2017. She was also a member of the state championship basketball team and the 2020 recipient of the Tom Dumay award.

Angellica Street: Street’s career highlights include a stellar track career in the javelin and shot put. She holds the all-class record in the state for javelin for a throw in 2019 of 156 feet, 11 inches at state. She holds the school record for a throw of 158-8. She was a two-time Gatorade player of the year in 2019 and 2020 and held the pre -season No. 1 rank for javelin in the country in 2020. She also took third in the shot put at state in 2019 and holds the all-time digs mark for volleyball in 2019, where she was named the team’s most valuable player.

Josie Windauer: Windauer was a soccer, basketball and track standout. In soccer she holds the school record for goals with 33 in 2019 and career goals with 83. She was all-state three years in a row in soccer from 2017 to 2019. In basketball she was all-state and all-conference twice and helped lead the team to two third-place finishes at state in 2018 and 2019. In track she was a two-time all-state athlete in the 4-by-400 relay and was all-conference in the 100, 200 and 400 meter relays. She also won the Tom Dumay award in 2020.

All three graduated from Columbia Falls in 2020. 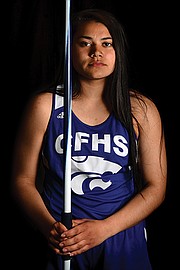